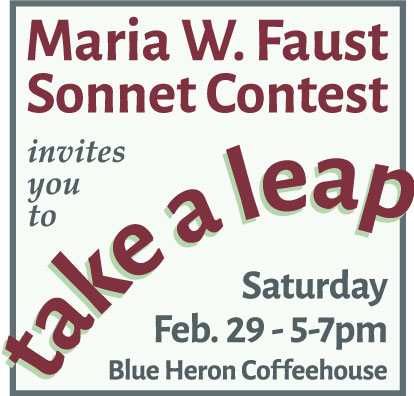 The Maria W. Faust Sonnet Contest invites you to Take A Leap with us on February 29th from 5-7pm at the Blue Heron Coffeehouse (162 W. 2nd Street, Winona, MN). In partnership with the River Arts Alliance and the Great River Shakespeare Festival, we will celebrate the 2020 contest with music by Jim Reineke, an exploration of the sonnet as a poetic form by Emilio DeGrazia, and activities including sonnet readings by Doug Scholz-Carlson of the Great River Shakespeare Festival and Ken McCullough, Winona’s former Poet Laureate; a workshop which will entice you to write a sonnet on the spot; and even a group Sonnet Mad Lib just for fun! The Blue Heron Coffeehouse will serve light refreshments. This event is free and open to the public.

The 2020 Sonnet Contest AWARDS CEREMONY will be held on Saturday, July 18, 2020, as part of the Great River Shakespeare Festival’s Front Porch Series. This event will be held in the Winona State University Campus Performing Arts Center at 11:00 am. The winning sonnets will be read by some of the winners and by members of the GRSF acting company.

Photos of the 2016 Awards Ceremony courtesy of Mary Farrell

A project of the River Arts Alliance.